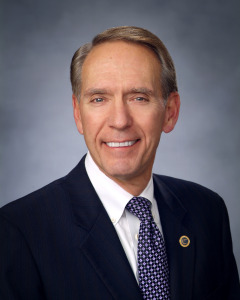 [/av_one_half][av_one_full first]
[av_textblock ]
Brice W. Harris was unanimously selected as Chancellor of the California Community Colleges by the system’s Board of Governors and began his tenure in November of 2012.

Prior to being selected as the leader of the largest system of higher education in the nation, Harris served 16 years as chancellor of the Los Rios Community College District in the Sacramento region, president of Fresno City College and a faculty member and vice chancellor in the Kansas City, Missouri community college system.

Dr. Harris has spent his career working to improve student success and access in American community colleges. While with Los Rios, he was instrumental in leading successful initiatives that improved student success. He also led the charge to expand access for thousands of students by overseeing the establishment of the district’s fourth college, Folsom Lake, and developing five additional educational centers in underserved areas of the region.

Harris understands the important connection between community colleges and the economy and currently serves as a member of the board of the California Chamber of Commerce. As an active member of the business community, he chaired the Sacramento Area Commerce and Trade Organization (SACTO), was the first educator to serve as president of the Sacramento Metropolitan Chamber of Commerce and served as chairman of the board of the Northern California World Trade Center.

Harris is also active in the arts having served on the board of the Crocker Art Museum in Sacramento, as board president of the Fresno Philharmonic Orchestra, and a board member of the Kansas City Museum.
Harris did his post-doctoral study at the Harvard University Institute of Educational Management, received his doctorate in education at Nova Southeastern University, his master's in communication from the University of Arkansas, and his bachelor's in communication from Southwestern Oklahoma State University.

Harris resides in Fair Oaks with his wife Barbara, who is an elementary educator. The couple has three adult children who live in California.
[/av_textblock]
[/av_one_full]